Himid’s research is undertaken within the context of contemporary art in and of the black diaspora. Questions about the level of recognition or celebration of the contribution made by these artists to cultural landscapes internationally are central to the project. Working with a range of museum services to interrogate their collections, she uses artworks as interventions to trigger dialogues around these hitherto neglected creative histories.

She leads the Making Histories Visible Project at the Centre for Contemporary Art. Collaborating with museums to interrogate collections in innovative ways, both excavating and preserving evidence of artists’ practice. Exploring hidden social histories through creative visual practice.Sharing information with larger partnership organisations and smaller groups committed to the development of new ways of writing about, making and showing contemporary art internationally.Working with students both undergraduate and postgraduate, to encourage new ways to develop their own practice based research.Investigating British newspapers and their representation of black people Collecting and archiving preserving the contribution of black visual art to the cultural landscape including Drawings Prints and Photographs by artists of the black diaspora.

Lubaina is the winner of the 2017 Turner Prize.

Thin Black Line(s) 2011/2012 Tate Britain re-assessed a lost curatorial moment and illustrated the connectivity and influence of black women artists working in London in the 1980s on contemporary art practice at the turn of the century. Artworks and archive materials were included by Sonia Boyce, Ingrid Pollard, Maud Sulter, Brenda Agard, Claudette Johnson, Veronica Ryan and Lubaina Himid. This exhibition achieved visitor numbers in excess of one million, acting as both an examination and display. 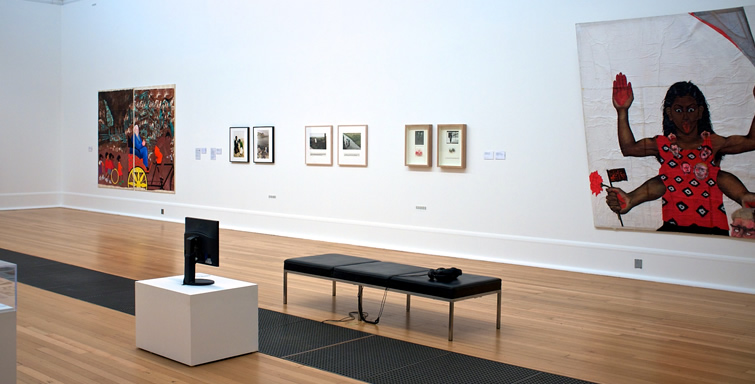 Significantly it enabled the acquisition of artists work into the Tate collection; allowing questions about how the participation of ethnically diverse artists and audiences in the strategic future of the museum could be developed. Himid used a number of counter curatorial devices within the space including a drawn “map” illustrating the range of cross cultural activity themed around publishing, teaching and curating during the eighties; a show-reel by Susan Walsh highlighting the range and immensity of women’s output and the production of a free full colour catalogue available in hard-copy and on-line.

Dr. Celeste-Marie Bernier in The burial and un-burial of women (Hampton University Press) says Leaving her audience under no illusions that the paintings, installations, photographs, sculpture and drawings on view are in any way representative of the total work produced by Black female artists in Britain, Himid liberates her viewers to take account of the artistic and political rationale for this group display.