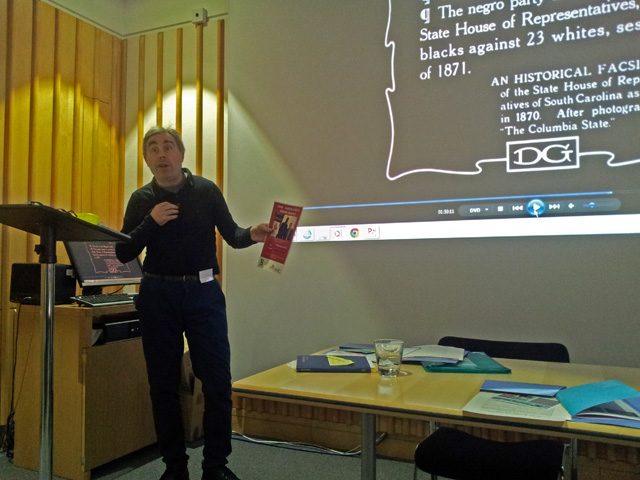 Professor Alan RIce launched the Symposium: 100 Years of D.W. Griffith’s The Birth of a Nation, which took place Friday 28 November 2014, 12:30-17:00 at the British Library Conference Centre.

Inspired by the centenary of one of the most controversial films ever made, this highly successful symposium considered the issues raised by the film, such as popular culture, national mythologies, the American South, racism, transnationalism, memorialisation, art, politics and ethics.

Professor Alan Rice, Director of IBAR gave a presentation on Black Agency Race and Representation in the Wake of D.W. Griffith’s ‘The Birth of a Nation’ discussing ways to use the notorious film appropriately in the classroom context.

The symposium was organised in collaboration with IBAR at the University of Central Lancashire, Edge Hill University and the University of Manchester as part of the programme: Art, Culture and Ethics in Black And White: 100 Years of D.W. Griffith’s The Birth of a Nation.

The symposium marked the launch of this multi-disciplinary network which will be hosting a year-long programme of events from November 2014 to November 2015 exploring the centenary of The Birth of a Nation, in partnership with public institutions and educational projects, including the International Slavery Museum, The Whitworth Art Gallery, Manchester, and the Race Relations Centre, Manchester.

Watch this space for details of the Symposium in Manchester in May (t.b.a) and details of a very special American visitor.

Prof. Rice discussing a scene from Griffith’s “The Birth of the Nation”