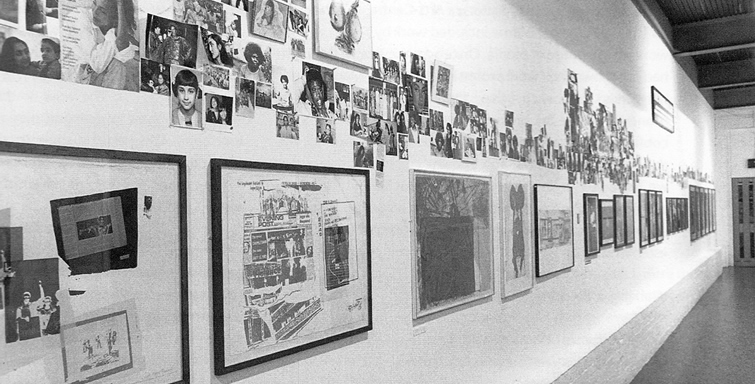 Images and Conversations from the 1980’s the show-reel produced by Susan Walsh played a central role in the Tate Britain display Thin Black Line(s) (2011/12). It contextualised the artworks on the gallery walls and made a direct link to the archive materials in the vitrines. By highlighting more than 150 works made by over thirty named women artists working during the eighties, it enabled an understanding and encouraged an acknowledgement that artwork of quality had been produced by a broad range of black women artists.

The 30 minute show-reel, consisted mainly of rare images of paintings, sculptures, photographs and installations, scanned from 25 year old photographic transparencies. This functioned in tandem with and was therefore also in a conversation with the artworks on display. Challenging the collective invisibility of a radical generation of British artists; charting their practice as well as mirroring their coming to voice. Furthermore the work allowed audiences to listen to conversations between artists. These took place at Lubaina Himid’s gallery The Elbow Room (London) in 1986 and were broadcast as part of Walsh’s research is centred on an investigation about how creative interventions into the archive can enable hitherto hidden cultural contributions to be made more visible, thus opening dialogues between artists, historians and communities. the Illuminations Channel 4 series The State of the Art: Ideas and Images in the 1980’s. One million general visitors, artists, historians and students looking at the temporary display during its eight month run, were able to engage with this show-reel. Tate acquired this show-reel for its library and archive collection in April 2012