Liverpool is home to one of the oldest and largest Black British communities. The city itself has a chequered history as Britain’s largest slave port with a legacy of conflicted race relations. As one of the most important port cities of the Atlantic world, Liverpool grew financially rich on the proceeds. The city has also been enriched culturally through the role it has played in forming and framing black communities throughout the diaspora. Liverpool has itself been shaped by the cultures of this diaspora. The city’s rich musical culture (formed in part from African American roots) and vernacular energy give a unique and dynamic quality to discussions about cultural creativity. Its rich heritage, together with the vibrancy and malleability of Liverpool, have led CAAR (Collegium for African American Research) to hold its 11th biannual conference on “Mobilising Memory: Creating African Atlantic Identities” at Liverpool Hope University.

Our conference recognises the importance of memory and memorialisation. We want to encourage papers about memory that see it as an active, ideological and often political process which communities and individual black subjects have used as a mobilising tool to counter hegemonic ideas and societal hierarchies in all areas of the African Atlantic and beyond. Papers can be about the physical action of mobility, addressing the long history of travel narratives in African Atlantic culture—including those where the experience is that of being “always elsewhere” (D’Aguiar)—or it can take mobilising as being more politically attuned and related to the way memory is used as a tool for changing consciousness and for creating homespace in the diaspora. The memory of slavery in the host city of Liverpool is so all-pervasive that its very bricks and mortar were said to be steeped in the blood of the trade. Activists both in the city and beyond have counteracted amnesia by mobilising culturally and politically against such wilful forgetting. The conference comes on the 50th Anniversary of Malcolm X’s final visit to Britain; his intervention in domestic and international racial politics during that sojourn is an exemplar of the local and global implications of memories of black presence creating new transnational realities in the face of global oppression.

Selected Papers from the conference will be published in a special edition of CAAR’s FORECAAST Series (Liverpool University Press).

The CAAR Conference took place from the 24th to the 28th of June at Liverpool Hope University. The theme was ‘Mobilising Memory: Creating African Atlantic Identities.’ Topics on the packed panels ranged from memory, identity, archives and museums to diaspora, black bodies and slave narratives.

In addition to the panels there were a number of optional trips into Liverpool. These included a walking tour of slave sites led by local guide Eric Lynch, a visit to the Bluecoat and talk with artist Keith Piper and an evening at the famous Cavern Club with music from a Beatles cover band.

As an admin assistant, I was working on the reception desk but had the chance to see a ‘Curators and Artists Session’. Curator Christine Eyene spoke on ‘Black women’s visual narratives: from curating to the archive and back’. A theme that stood out, in the context of Christine’s fight to win equal recognition for black female artists in galleries, was the politics of space.

Artist Jade Montserrat spoke on ‘Burial, the Brontes and Lost Children, a text and film performance’. First she showed her unsettling film ‘Clay’, where she explored her identity as a ‘lost child’ of the African Atlantic on the Yorkshire Moors by washing and caking her naked body in clay as she dug a pit in which she buried herself to become part of the landscape.

In her second film Jade ran barefooted over peat to explore the relationships between her body, memory and ancient British peat bogs. She mentioned she was running and jumping for over a day. Her connection with the land and altered state of consciousness were conveyed by the video. 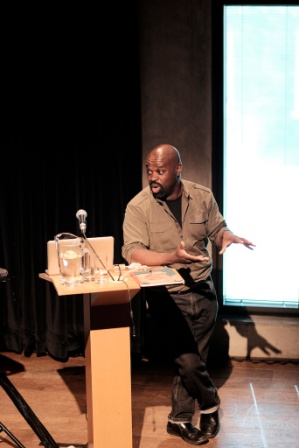 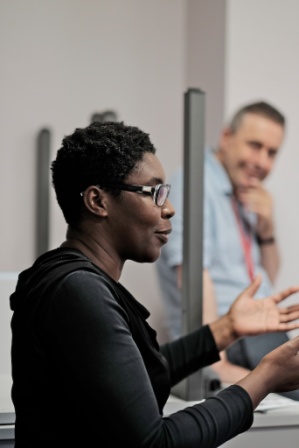 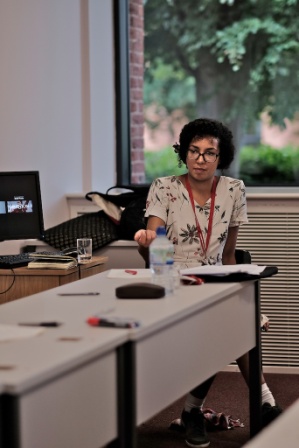